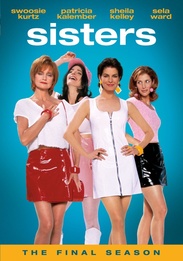 Say goodbye to your favorite Sisters.

The Reed siblings return for the sixth and final season of the hit series Sisters. A popular and award-winning 90s television favorite, Sisters explored the bonds of family and womanhood like few series had ever attempted before. Veering from light humor to powerful drama, Sisters captivated audiences with its sharp characters and engaging plotlines.