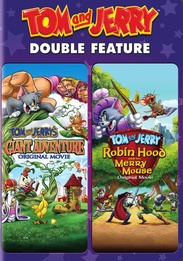 DOUBLE THE CAT AND MOUSE FUN! Tom and Jerry's Giant Adventure In this all-new original movie, Tom and Jerry are among the last animals living in Storybook Town, a fairy tale-inspired theme park where dreams come true, if you believe. Young Jack is desperate to save the park from the hands of a greedy billionaire, setting out with his loyal cat and mouse friends to sell his prize cow for... some magic beans?! What follows is a journey up a beanstalk to a magical land ruled by a massively mean and hungry giant, and home to fun, fabled fellows like Droopy, Spike and even a golden goose! Tom and Jerry: Robin Hood and His Merry Mouse The fur flies again, when Jerry, as the smallest member of Robin Hood's gang, encounters Tom, a feline squire to Maid Marion. Not only are the cat and mouse from opposite sides of the moat, but Tom is secretly working as a spy for the Sheriff of Nottingham and evil Prince John. But when the villains succeed in capturing Robin, Tom realizes to his horror that they intend on harming Marion as well. So he joins forces with Jerry, not only saving their respective humans, but allowing for the safe return of King Richard as well.