Coming Through the Rye 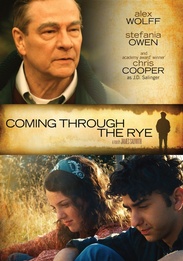 Coming Through the Rye, set in 1969, is a touching coming of age story of sensitive, 16 yr. old Jamie Schwartz, who is not the most popular kid at his all boysâ boarding school. Disconnected from students and teachers, he believes he is destined to play Holden Caulfield, the main character of The Catcher in the Rye and has adapted the book as a play. After a series of increasingly hostile altercations with the boys at school Jamie runs away to search for J.D. Salinger. On his way he picks up Deedee Gorlin, a quirky townie. Their odyssey to find Salinger becomes a journey of sexual awakening, the discovery of love and of the meaning of oneâs life.

Rated PG-13 for some drug material, sexuality and language.