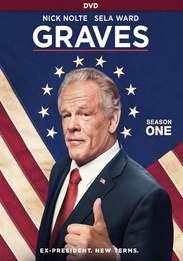 "Graves," a single-camera dramedy, tells the story of President Richard Graves (Nick Nolte), a former two-term POTUS, as he embarks on a Don Quixote-like quest to right the wrongs of his administration and reclaim his legacy 25 years after leaving the White House. With topics ranging from immigration to gay rights, foreign policy to public funding for arts and sciences, Graves holds nothing sacred as he unspools some of his administrationâs proudest victories. His enlightenment takes place just as his wife, Margaret Graves (Sela Ward), decides itâs finally time for her to pursue her own political ambitions.