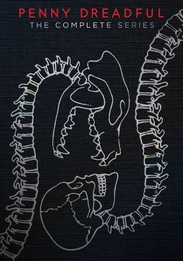 Some of literature's most terrifying characters, including Dr. Frankenstein and his monster, Dorian Gray, and iconic figures from the novel Dracula are lurking in the darkest corners of Victorian London. They are joined by a core of original characters in a complex, frightening new narrative, where personal demons from the past can be stronger than vampires, evil spirits and immortal beasts. Relive every chilling episode of Showtime's Penny Dreadful if you dare  available in a complete series set on BD and DVD for the first time!