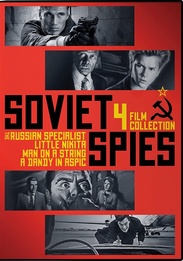 Who Can You Trust?

They took his family. Now he's out for revenge.

Where does your loyalty lie?

Academy AwardÂ®-winner Ernest Borgnine (1955, Best Actor, Marty) gives one of his finest performances as a Russian-born movie producer (inspired by composer Boris Morros) whose background makes him an ideal counterspy for the CBI.

This stylish '60s espionage thriller (with a score by Quincy Jones) bounds between London and Berlin, following cool and inscrutable Alexander Eberlin (Laurence Harvey, The Manchurian Candidate), a British agent tasked by MI-6 with finding the double-agent in their midst.