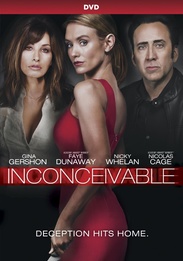 This gripping tale of blood ties and dark passions reunites stars Nicolas Cage and Gina Gershon for the first time since FACE/OFF. Hoping to return to work as a doctor, Angela (Gershon) befriends young mother Katie (Nicky Whelan) and asks her to serve as a live-in nanny. But Angela and her husband, Brian (Cage), have no idea about Katieâs horrific past, and Brianâs mother (Faye Dunaway) grows suspicious. When infertile Angela asks Katie to become a surrogate mother, Katieâs ulterior motives begin to surface, and Angela quickly realizes that things are not what they seem.

Rated R for some violence, sexuality, nudity and language.