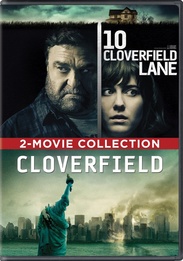 Cloverfield
Five young New Yorkers throw their friend a going-away party the night that a monster the size of a skyscraper descends upon the city. Told from the point of view of their video camera, the film is a document of their attempt to survive the most surreal, horrifying event of their lives.

10 Cloverfield Lane
A woman (Mary Elizabeth Winstead) discovers the horrifying truth about the outside world while living in an underground shelter with two men (John Goodman, John Gallagher Jr.).