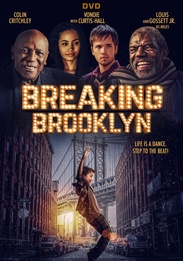 Aaron wants to dance. Big brother Albee wants a girlfriend. They both need food and shelter. But when their deadbeat dad is arrested and their car towed, the boys find themselves on the streets. Miraculously, their teacher, Miles, takes them under his wing and into his home, and invites Aaron into his tap class. Filled with dance routines and Big Apple magic - and starring Louis Gossett Jr. and Vondie Curtis-Hall - this touching family drama shows that you're never out of luck when you have a dream.