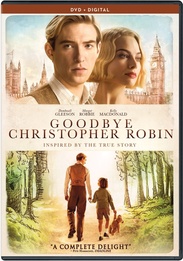 At the end of the First World War, beloved children's author A. A. Milne (Domhnall Gleeson) creates the magical world of Winnie-the-Pooh- which brings him immediate acclaim. But the books' international success comes at a cost to the author, his young son Christopher Robin (Will Tilston) and his wife Daphne (Margot Robbie), in this beautifully filmed, poignant story about fame and family that also stars Kelly Macdonald.