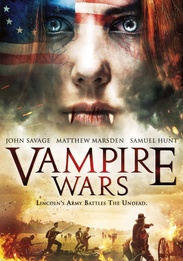 Two brothers return from the Civil War's battlefields to the town they once called home. Having been attacked by Vampires, they begin their transformation into creatures of the night. Recruiting the help of recently freed slaves, they begin to build Nightshade Farm. But when the brothers and a neighboring rival begin to feud, all hell breaks loose in this Southern gothic Civil War epic.

Rated R for violence/bloody images and a scene of sexuality.