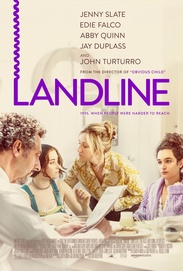 When two sisters suspect their father (John Turturro) may be having an affair, it sends them into a tailspin that reveals cracks in the family faÃ§ade. For the first time, older sister Dana (Jenny Slate), recently engaged and struggling with her own fidelity, finds herself bonding with her wild teenage sister Ali (Abby Quinn). The two try to uncover the truth without tipping off their mother (Edie Falco) and discover the messy reality of love and sex in the process.

Rated R for sexual content, language and drug use.