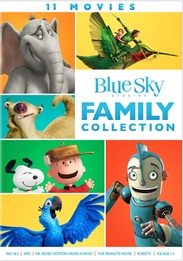 Join your favorite animated characters, voiced by some of Hollywood's biggest stars, in these eleven delightful family films! It's nonstop adventure when a small band of misfit creatures contend with humans, dinosaurs, a meteor and more in the five hilarious Ice Age films. Take flight with the funny feathery friends of Rio and Rio 2, and explore the magical miniature worlds of Epic and the Dr. Seuss' Horton Hears A Who! Laugh along with Charlie Brown, Snoopy and the gang in The Peanuts Movie and get inspired by the courage of a small-town robot with big ambition in Robots!