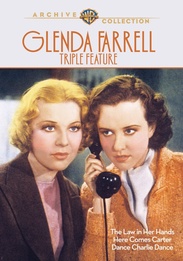 Perhaps best known for her portrayal of intrepid reporter Torchy Blane in a series of films, the great Glenda Farrell was an indispensable member of the Warner Bros. stock company of players. More "the girl from down the block" than "the girl next door," Glenda invested her characters with grit and vinegar -- wise to the wise guys but still a sweet and solid citizen -- and graced any scene she was in with extra zest. In The Law in Her Hands, Glenda plays second chair to Margaret Lindsay when the two portray a pair of recent law grads who end up as mouthpieces for a mobster (Lyle Talbot). Here Comes Carter finds Glenda playing secretary to Ross Alexander's on-the-air Hollywood whistle-blower who's being targeted by the mob. Finally, Glenda plays a key member of an ensemble that includes Allen Jenkins, Jean Muir and Stuart Erwin in the backstage satire Dance Charlie Dance.