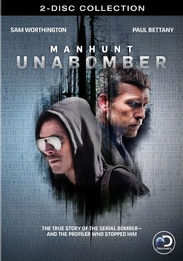 MANHUNT: UNABOMBER tells the story of the hunt for the deadliest serial bomber in history. FBI Agent Jim Fitzgerald (Sam Worthington) â who pioneered the use of forensic linguistics to identify and capture Ted Kaczynski (Paul Bettany), the man who came to be known as the "Unabomber" â faced an uphill battle against both Kaczynski and the bureaucracy of the UNABOM task force.