The Americans: The Complete Fifth Season 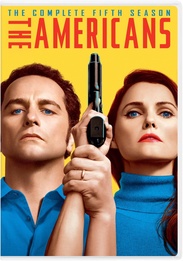 DANGER, DISILLUSIONMENT AND BETRAYAL reach an all-time high in the suspense-laced fifth season of The Americans, which every season makes multiple critics' lists for "The Best Show on Television." KGB agents Philip and Elizabeth Jennings' (EmmyÂ® nominees Matthew Rhys and Keri Russell*) unwavering dedication to their work comes at even more of a personal cost than before. And as Paige (Holly Taylor) is drawn deeper into the reality of her parents' secret job, she realizes she will never have a normal life. Meanwhile, as Cold War tensions continue to escalate, Philip and Elizabeth are suspicious of Stan's (Noah Emmerich) new romance, and they become more acutely aware of the vast disparity between American abundance and Russian scarcity.