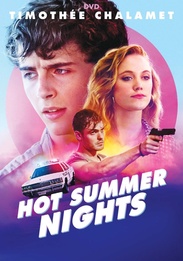 Set in Cape Cod over one scorching summer, this fun and stylized thriller follows Daniel (TimothÃ©e Chalamet), a teenager who gets in over his head dealing drugs with the neighborhood rebel while pursuing his new partner's enigmatic sister.

Rated R for drug content and language throughout, sexual references, and some strong violence.