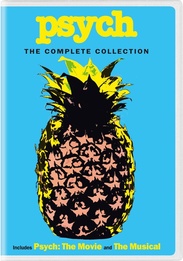 When lifelong best friends Shawn Spencer (James Roday) and Burton "Gus" Guster (DulÃ© Hill) stumbled into crime solving, they had no clue that their detective agency, Psych, would cause such a scene. With Shawn's fake psychic sleuthing and sidekick Gus' nose for clues, the unlikely duo tackled countless murders and mysteries, from the weirdly wacky to the daringly dangerous. "You know that's right!"