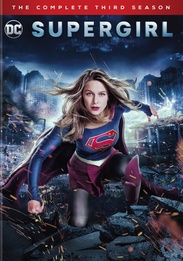 Ridding National City of Queen Rhea and her Daxamite army was a major win for Supergirl, but one that came at a significant cost, as Kara was forced to sacrifice her budding relationship with Mon-El. As season three returns with all-new supercharged adventures, Kara and team will come up against a new threat in the form of DC Worldkiller, Reign.