Queen of the South: The Complete Second Season 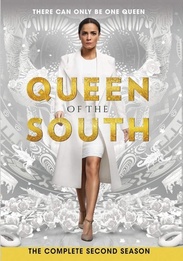 Inspired by the global best-selling novel La Reina Del Surby internationally acclaimed author Arturo Perez-Reverte, QUEEN OF THE SOUTH follows the journey of Teresa Mendoza (Alice Braga) and the sacrifices she must make not only to survive, but to make it to the top of the drug world. Where will she draw the line when her moral code and her destiny are at odds? In Season Two, Teresa's loyalties are tested when she's ordered to hunt down and kill a DEA mole. And an uncharacteristic blunder forces Camila (Veronica Falcon) and Teresa to go on the run from hitmen, where they forge a deeper bond. But eventually destinies and desires collide between Teresa and Camila, forcing them to accept one absolute truth: there can only be one queen.