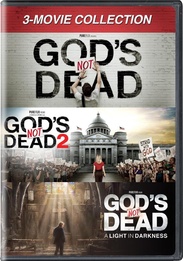 God's Not Dead When an atheist Philosophy professor (Kevin Sorbo) plans to forego "dusty arguments" in his class, he insists the new students declare that "God is dead." Unable to do this, Josh (Shane Harper) is challenged to defend his faith and prove to the class that God's Not Dead. Against all odds, Josh stands up for his faith and takes on the challenge. God's Not Dead 2 When high school history teacher Grace Wesley (Melissa Joan Hart) is asked a question about Jesus in class, her reasoned response lands her in deep trouble. The ensuing epic court case could expel God from the classroom-and the public square-once and for all! God's Not Dead 2 is a powerful call to action: Where will you stand? God's Not Dead: A Light in Darkness After a deadly fire rips through St. James Church, Hadleigh University leaders use the tragedy to push the congregation off campus, forcing the church to defend its rights and bringing together estranged brothers for a reunion that opens old wounds and forces them to address the issues that pulled them apart.