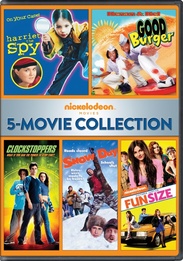 GOOD BURGER: Kenan Thompson and Kel Mitchell, stars of the popular Nickelodeon series All That, confront the ogre of faceless corporate tyranny and have fun doing it in this comedy for young people. HARRIET THE SPY: The first feature film from the Nickelodeon cable channel, Harriet the Spy is an updated version of Louise Fitzhugh's best-selling 1964 children's novel. Sixth grade outcast Harriet (Michelle Trachtenberg) is an only child who has mostly been raised by her nanny, Golly (Rosie O'Donnell), rather than her materialistic parents. Harriet wants to be a writer when she grows up, and only Golly encourages her creative pursuits. CLOCKSTOPPERS: Director Jonathan Frakes (Star TrekTM: Insurrection, Star TrekTM: First Contact) deftly mixes laughs with thrills in the sci-fi adventure film Clockstoppers. Zak Gibbs (Jesse Bradford, Hackers) is an ordinary teenager who suddenly obtains extraordinary powers when he stumbles upon a mysterious wristwatch-type device that can literally stop time in its tracks! FUN SIZE: Teen sensation Victoria Justice (Nickelodeon's Victorious) stars as Wren, a whip-smart high school senior stuck babysitting her annoying little brother, but that all changes when he somehow manages to get loose. Now Wren and her three friends need to find him as they set off on the most unexpected and unforgettable adventure of their lives...as long as mom doesn't find out! SNOW DAY: Anything can happen on a Snow Day...a lovesick teenager declares his affection for the girl of his dreams. A downtrodden employee defies his tyrannical employer. A ten-year-old tackles the scariest villain of her life. And plastic action dolls suddenly come to life. Or do they? You just never know how a Snow Day might turn out. You might even discover you've saved the universe!