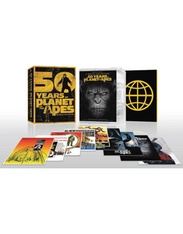 Fifty years after the first installment in the iconic Planet of the Apes franchise comes this exclusive box set featuring nine films  together for the first time on Blu-ray & Digital! Mankind's fate is at stake when highly intelligent apes and humans try to co-exist amidst hostility, environmental challenges and betrayal. With thrilling action and astounding visual effects, and featuring some of Hollywood's biggest stars, these sci-fi adventures are among the most acclaimed of all time.