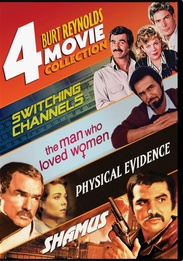 The box office champ with the boyish charm, Burt Reynolds was one of Hollywood's best and brightest. See him in four films that showed his dramatic and comedic range.

Shamus - 1973 - 99 min â PG - Starring Burt Reynolds, Dyan Cannon, Joe Santos, Kevin Conway
New York private eye Shamus McCoy likes girls, drink and gambling, but by the look of his flat business can't be too hot. So an offer of $10,000 to finds some diamonds stolen in a daring raid with a flame-thrower is too good to miss. His investigations soon get pretty complicated and rather too dangerous. At least along the way he does get to meet Alexis.

The Man Who Loved Women - 1983 - 119 min â R - Starring Burt Reynolds, Julie Andrews, Marilu Henner, Kim Basinger, Barry Corbin
A Los Angeles playboy renowned for his fast and loose love life runs head on into a mid-life crisis in this uproarious Blake Edwards comedy starring Burt Reynolds and Julie Andrews. David Fowler (Reynolds) has two passions, sculpting and women, and he's been quite successful in both departments until now. David finds that his insatiable hunger for women begins to render him socially, artistically, and, finally, sexually impotent. His desperate inner struggle drives him to the couch of an attractive psychiatrist Marianna (Andrews), to whom David reveals everything from his first sexual encounter to his currently disturbing and often hilarious romantic adventures. But can Marianna help David control his roving eye before it's too late?

Physical Evidence - 1989 - 99 min â R - Starring Burt Reynolds, Theresa Russell, Ned Beatty, Kay Lenz
Burt Reynolds stars as a cop accused of murder. Theresa Russell is the lawyer who must defend him. Between the evidence and the passion lies innocence or guilt in this suspense thriller.

Switching Channels - 1988 - 105 min - PG - Starring Burt Reynolds, Kathleen Turner, Christopher Reeve
Cable news anchor Christy Colleran (Kathleen Turner) and her cagey boss, John L. Sullivan (Burt Reynolds), have a long history together: They used to be married. But now Christy is set to leave journalism and her ex-husband forever by moving to New York City with her fiancÃ©, retail mogul Blaine Bingham (Christopher Reeve). Since Sullivan still has feelings for her, he hatches a plan to keep Christy around by assigning her to a hot news story she can't resist.