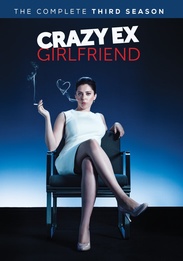 When last we left our intrepid and at least slightly nutty heroine, Rebecca Bunch (Rachel Bloom), she was at her wedding, abandoned at the altar by her obsession, Josh Chan (Vincent Rodriguez III). In that moment, Rebecca found herself in a cliffhanger. Literally, because she, like, almost flung herself off a cliff. Instead, she found an unexpected well of strength inside herself and finally stood up to the father who abandoned her, flanked by her fierce girl squad. Phew. It was quite the wedding. So what's a girl to do now? Why, get revenge, of course. Because Josh Chan, love of her life? He's crossed over to the dark side -- ergo, he must pay, unless, of course, he sees the error of his ways and realizes he and Rebecca are meant to be. But will he? It might be a bit tough to figure out, since he ran off the day of the wedding to be a priest. (Did we mention it was quite the wedding?) There's also the matter of Rebecca's friends and how far they will follow her attraction now that it's turned possibly just a touch fatal. Paula (Donna Lynne Champlin), now in training to be a legal eagle, has to decide how far to walk the gangplank for her cookie, Rebecca. Meanwhile, Valencia (Gabrielle Ruiz) and Heather (Vella Lovell) will be facing giant obstacles and challenges in their personal lives. Hey, it's not like anyone in West Covina ever just gets to be happy. In season three, we will also spend more time with a new man in Rebecca's orbit, mega-WASP Nathaniel Plimpton III (Scott Michael Foster), who will collide with her like a very handsome meteor. He may seem all alpha on the outside, but he has his own daddy issues to work out. See above -- no one in the Cov just gets to be happy right away. In other WeCo news, supercouple White Josh (David Hull) and Darryl (Pete Gardner) will be challenged by Darryl's baby fever. Will Darryl give up his yen for a baby Darryl or Darrylette? And how will Rebecca be entangled in their plans? And what about Rebecca's mental health? Will she finally turn her attention to what's fueling her romantic fire? This and more, accompanied by a bajillion songs and dances, coming up next on season three of Crazy Ex-Girlfriend.