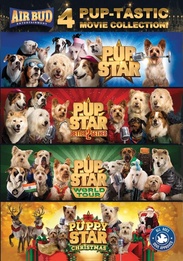 Follow the grand musical adventure of Tiny and her friends with FOUR incredible Pup Star movies, from finding her voice to becoming a musical icon. From a nationwide road trip to reunite with her girl Lou to trading places with her street-smart identical sister Scrappy to a tour that takes Pup Star WORLDWIDE, and to saving Christmas with her new pups, it's always an adventure on PUP STAR.