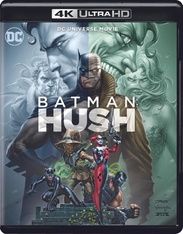 When threads from Batmans past begin to unravel, the race is on for the Dark Knight to crack Hushs deadly game. Based on the tour de force graphic novel, Batman: Hush ranks as one of the greatest Batman stories ever told. A virtual whos who of DC  including Superman, Nightwing, Catwoman, Poison Ivy, Joker and more  is woven into this twisting tale of murder, mystery and romance that will create strange alliances and reveal shattering secrets when Hushs silence is finally broken.

Rated PG-13 for violence and action, suggestive material, and language.