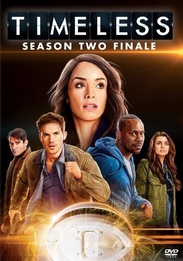 Series Finale
As Christmas arrives in the Bunker, and the Time Team is inspired by a visit from their future selves to find a way to try to save Rufus. But when the Mothership jumps to 1848 California, they're forced to put those plans on hold and chase Rittenhouse back to the Gold Rush, where they encounter one of the era's most dangerous villains. Then chasing the Mothership to Korea in the winter of 1950, the team helps a stranded, pregnant refugee attempt to escape a tragic fate.