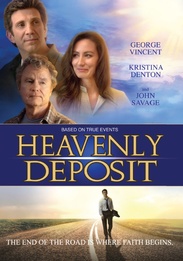 After the devastating loss of his father as a young boy, Peter Ranos denies the presence of God in his life and decides to take matters into his own hands. Years later we find Peter married, living the daily grind of a struggling actor. Despite his best intentions, Peterâs life is riddled with financial ruin, joblessness and ultimately marital challenges. However, in his mind, all he needs is that one big break to make things right. But every time a break is near, something happens which only sets him back further. Peterâs world finally collapses. In his despair, Peter has a divine experience and cannot deny the power of God. All he has to do is accept Godâs love and lean on a power greater than his own. But will he?