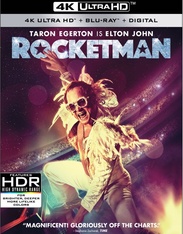 Rocketman is an epic musical fantasy about the incredible human story of Elton Johnâs breakthrough years. The film follows the fantastical journey of transformation from shy piano prodigy Reginald Dwight into international superstar Elton John. This inspirational story - set to Elton Johnâs most beloved songs and performed by star Taron Egerton - tells the universally relatable story of how a small-town boy became one of the most iconic figures in pop culture.

Rated R for language throughout, some drug use and sexual content..