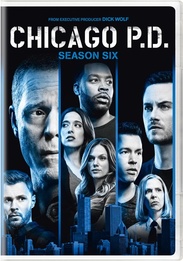 Emmy®-winning Executive Producer Dick Wolf delivers the gripping sixth season of Chicago P.D. The gritty police drama delves into the lives of the men and women of the Chicago Police Department's elite Intelligence Unit as they combat organized crime, drug trafficking, homicides and more on the tough streets of Chicago. Under the command of the tenacious Sergeant Hank Voight (Jason Beghe), the intelligence squad dishes out their own unique brand of justice to protect the city's citizens and uphold the law.