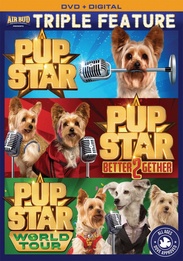 From the Makers of Air Bud!

From the creators of âAir Budâ and âAir Buddiesâ comes a new film series where dogs can not only talk -- they can SING! Follow the grand musical adventure of Tiny and her friends with three incredible Pup Star movies. From finding her voice to becoming a musical icon, it's always an adventure on PUP STAR.

Tiny, a cute little Yorkie pup with a big voice, gets a chance to audition for the singing competition for dogs, "Pup Star." After she earns a place in the finale, she's suddenly dog-napped! But with the help of her new friend, Charlie, a retired rock-and-roller, she escapes. Together they leave on an incredible journey through some of music's most iconic cities. Filled with all-new songs and the biggest cast of talking and singing canines ever assembled, Pup Star is an incredible family film filled with fun, music and heart.

After winning âPup Starâ and becoming an international pup sensation, Tiny has her world turned upside down when an evil rival switches her out in competition with a street pup named Scrappy and an incredible journey through iconic cities ensues in this fun and hilarious dog-out-of-water, musical adventure!

âPup Starâ is back and bigger than ever as the hit singing pup competition goes global. After achieving international stardom Tiny joins the inaugural Pup Star World Tour as a celebrity judge. As they travel the world each judge chooses their favorite contestant to compete for the new title of global pup star champion.