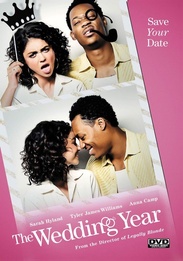 Meet Mara. She is a carefree 27-year old with the half-hearted aspiration of being a photographer. She stumbles upon a guy named Jake on Tinder and an unexpected connection develops. Things are going well until wedding invitations start pouring in. This is Maraâs nightmare, but Jake is thrilled. They decide which weddings to attend and embark on a year-long adventure together. As wedding season kicks off, Mara finds more inspiration for her photos. Over seven weddings, we watch Mara and Jakeâs bond deepen and eventually Jake proposes. Although Mara says yes, she has reservations, eventually causing her to blow up the relationship. At first, newly single Mara thinks it will be easier to move on, but then she realizes she had it pretty good. As Jake is building his new life, Mara begins to come into her own as well, finally developing her passion for photography into a career. At Alex's wedding, Mara confesses she still loves Jake and they begin anew.