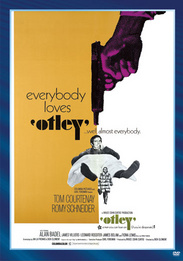 Born loser Gerald Otley (Tom Courtenay) is a freeloader living off the nearly exhausted kindness of friends and former lovers. One night, Otley is drunk and asleep when his host is murdered. The next morning, before the police arrive, he is kidnapped by a beautiful woman he met the night before (Romy Schneider) and her partner, who attempt to extract information from him but eventually determine he's clueless. Realizing he's in the midst of an espionage conspiracy and also wanted for murder, Otley stumbles from one near-crisis to another, incapable of distinguishing friend from foe, and unable to extricate himself. Set in swinging London, the story is propelled by Courtenay's charm and a sense of humor informed by the best of British spy films; co-written and directed by Dick Clement. Newly remastered.