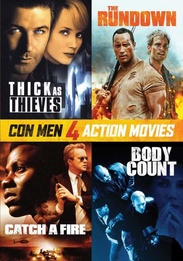 A thrilling assortment of blockbuster action films featuring the biggest stars in some of their most explosive roles! Featuring the talents of Dwayne "The Rock" Johnson, Alec Baldwin, Tim Robbins, Forest Whitaker, Christopher Walken, Ving Rhames, John Leguizamo, Rosario Dawson and so many more, this is one pumped-up movie pack that delivers a non-stop adrenaline rush.

Thick As Thieves - Two self-styled criminal masterminds find themselves in a turf battle neither much cares about in this underworld story that balances comedy against drama.

The Rundown - A tough aspiring chef is hired to bring home a mobster's son from the Amazon.

Catch A Fire - A drama about terrorism in Apartheid-era South Africa, revolving around a policeman and a young man who carries out solo attacks against the regime.

Body Count - When an art museum heist goes terribly wrong and one of their own ends up dead, a group of professional criminals are forced to head south with the law on their heels every step of the way.

Body Count
Catch a Fire
The Rundown
Thick As Thieves