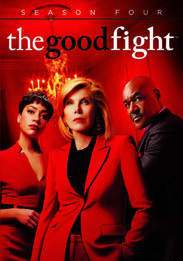 Season four of THE GOOD FIGHT finds Reddick, Boseman & Lockhart navigating a very different landscape. After they lost their biggest client, Chumhum, and their founding partner's name was tarnished, Reddick, Boseman & Lockhart was forced to accept an offer by a huge multi-national law firm, STR Laurie, to become a small subsidiary. Suddenly, all of their decisions can be second-guessed by the giant firm that is literally on top of them. While STR Laurie initially seem like benevolent overlords, we find Diane Lockhart and her colleagues chafing at their loss of independence while simultaneously investigating the emergence of a mysterious "Memo 618."