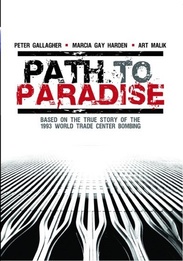 Secret warehouses, basement bomb factories, fake passports. . . It took a lot of work to plan the bombing of the World Trade Center. But under the noses of the FBI and the NYPD, a plan has been devised that will stun the nation, and take the extremist murderers on the PATH TO PARADISE. Based on the shocking true story.