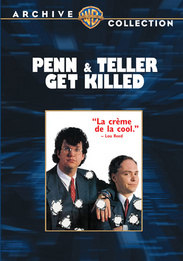 The "bad boys of magic" go over the edge in this mind-blowing, role-switching comedy murder mystery set in the dizzying world of Altlantic City casinos. In a TV interview, Penn mentions his idea of a fun practical joke: "I wish someone were trying to kill me. It would give focus to my life, excitement. I'd be like James Bond." Twenty-million people hear him. One decides to deliver a punchline he'll never forget. Made by people who thought Psycho was a comedy, Penn and Teller Get Killed (they also wrote the piece) features Caitlin Clarke as the femme fatale and David Patrick Kelly as the Edgar Allan Poe-esque nutcase with a new mission. Arthur Penn, known for hip masterpieces like Bonnie and Clyde, Alice's Restaurant and Little Big Man, directs with roller-coaster pacing and subversive intelligence.