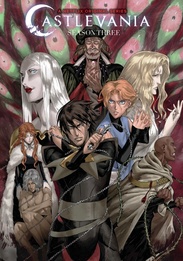 Castlevania Season 3 contains episodes 1-10 of the anime directed by Ryoichi Uchikoshi and features the voices of Richard Armitage and James Callis.

In the aftermath of Dracula's death, Trevor and Sypha are travelling, Alucard remains at the castle in misery, and Isaac is returning to Europe for his revenge. But Carmilla, reunited with her vampire sisters of the Styrian ruling court, sees a way to take advantage of Dracula's demise and build a new future - and she needs imprisoned Hector to achieve it.