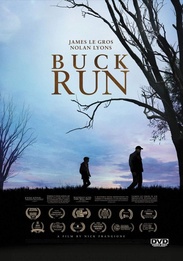 Director Nick Frangione draws on his childhood memories of growing up an outsider in rural Pennsylvania for this affecting drama. After the death of his mother, heartbroken 15-year-old Shaw (Nolan Lyons, Boardwalk Empire) must move in with his estranged father (veteran character actor James Le Gros), a conflicted alcoholic more concerned with hunting deer than raising a son. Shaw, already a bullied outcast at school, struggles to come to terms with his grief and his new life with an emotionally distant dad while wanting a traditional funeral for his mom something his father can't afford. Frangione's strengths in Buck Run are twofold: spot-on acting from his two leads and a perfect evocation of what it's like to live in conservative, rural America at this particular moment. In a world of swap meets and damaged souls, will this grieving teen find a place to fit in?