Goon: Last of the Enforcers / Knights of Badassdom 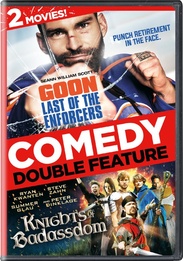 Goon: Last of the Enforcers: After one too many injuries, hockey enforcer Doug Glatt (Seann William Scott) is forced to give up his aspirations of going to the big show and settle into a buttoned down career as an insurance salesman at the urging of his pregnant wife Eva (Alison Pill). However, Doug can't resist the siren call of the Highlanders, so he sets course to reclaim his former glory. Knights of Badassdom: Fantasy and reality collide on the Fields of Evermore when a group of Love Action Role Players inadvertently summon a blood-lusting succubus from the pits of Hell. Now three best friends (Peter Dinklage, Steve Zahn and Ryan Kwanten) and one incredibly hot babe (Summer Glau) must prove they are more than just make-believe warriors and become true "Knights of Badassdom."