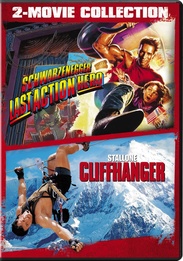 Last Action Hero
A golden ticket handed down from Houdini puts a boy in the middle of a Hollywood superstar's world.