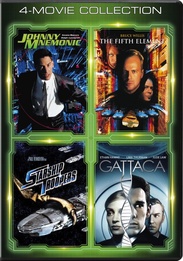 The Fifth Element
New York cab driver Korben Dallas didn't mean to be hero. But he just picked up the kind of fare that only comes along every five thousand years.

Gattaca
In Gattaca, only the strong succeed and the strong are genetically pre-selected at birth. But when one man dares to defy the system, he gets caught in a web of lies, corruption and murder. A smart stylish thriller laced with high-wire suspense.