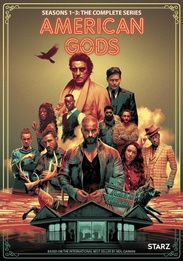 Set in a hidden world where magic is real and gods exist on earth, AMERICAN GODS chronicles the brewing war between Old Gods and New Gods, as the traditional gods of mythology are steadily losing believers to a burgeoning pantheon of modern gods focused on technology and money. The story across three seasons centers around ex-convict Shadow Moon, bodyguard for the mysterious Mr. Wednesday, an Old God trying to rebuild the power and influence the Old Gods once had. As events unfold and Shadow struggles with his identity and place in the world, AMERICAN GODS examines humanityâs conflicted relationship with faith and the unknown.