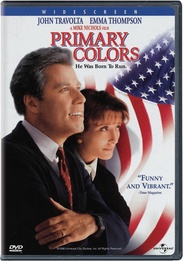 John Travolta leads an all-star cast (including Academy Award-winners Emma Thompson, Kathy Bates and Billy Bob Thornton) on a wild race to the presidency in Primary Colors. Jack Stanton (Travolta) is a virtually unknown Southern governor on a quest for the White House with his strong, savvy and equally ambitious wife, Susan (Thompson). Running against the odds, the Stantons need all the help they can get from their extremely colorful political team. Together, they take off on a hilarious, heart-wrenching and ultimately history-making roller coaster ride to the top.