The Return Of The Beverly Hillbillies 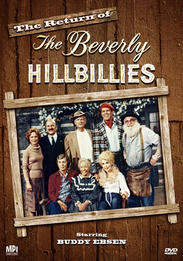 Following the death of Granny, Jed Clampett has returned home to live in his country cabin while son Jethro has stayed on in California as a Hollywood movie producer and Elly Mae manages a zoo full of the critters she loves. Former bank assistant Mrs. Hathaway now works for the U.S. Government and along with her new boss "Chief," played by Werner Klemperer (Colonel Klink in Hoganâs Heroes) attempts to solve the nationâs energy crisis with some unexpected help from the Clampetts.