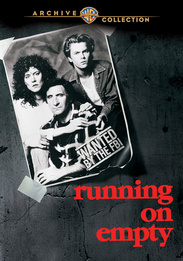 After antiwar activists Annie and Arthur Pope (Christine Lahti and Judd Hirsch) blew up a napalm lab in 1971, they became lifelong fugitives. They and their children have stayed just one step ahead of the law, running from state to state, job to job, identity to identity. But now elder son Danny (River Phoenix) wants to stop running from a past not his. And to do so, he might never see his on-the-lam family again. Directed by Sidney Lumet from Naomi Foner's Golden Globe Award-winning screenplay, this powerful, bittersweet movie also stars Martha Plimpton and Steven Hill, and earned acting honors for the emotional performances of Lahti (Los Angeles Film Critics Best Actress Award) and Phoenix (named Best Supporting Actor by the National Board of Review).