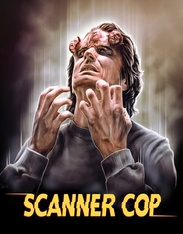 Rookie cop Sam Staziak (Daniel Quinn, Wild At Heart) has a unique gift: he is a Scanner, which gives him the power to read the thoughts of others, and also to inflict great bodily harm...and death. To repress his abilities, he takes a medication designed to keep Scanners sane and rational and from exacting harm on others. When a mad scientist named Karl Glock (Richard Lynch, Invasion USA) begins using mind control to murder police officers, Sam realizes that only he and his unique gift can put an end to the mayhem and uncover the identity and diabolical motives of this bloodthirsty madman... The first true sequel to David Cronenberg's 1980 horror classic, producer Pierre David's (Videodrome) first foray into directing, SCANNER COP, is a tense and bloody mix of gruesome body horror and action packed police thriller. Never released on disc in the US, Vinegar Syndrome proudly brings this mid 90s direct-to-video hit to Blu-ray and 4K Ultra HD, newly restored from its 35mm original camera negative and featuring a brand new extended making of documentary with its cast and crew.