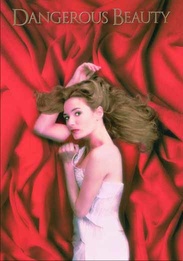 The sensuous true story of the woman who defied convention in 16th-century Venice comes to the screen in the ravishing Dangerous Beauty. Catherine McCormack plays Veronica Franco who, under the knowing tutelage of her mother (Jaqueline Bisset), becomes a courtesan to the rich and powerful. But she'll pay a price. Veronica may have to turn away forever from the nobleman (Rufus Swell) she loves. And she may stand alone when the Inquisition charges that her wiles are witchcraft. Shot on Italian setting recreating Renaissance Venice, Dangerous Beauty is as sumptuous as it is passionate, a work of redemptive romance that fills the eye and heart.

Rated R for some scenes of strong sexuality, and for nudity and language.