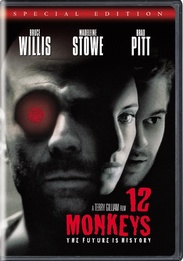 Between sanity and madness, fantasy and reality the past and the future, comes an adventure beyond imagination. Cole arrives at the mental hospital, claiming to be a time traveler from the year 2035. His mission: to save humanity from a killer virus that will devastate the future world population. A beautiful psychiatrist initially classifies Cole as delusional, but she soon joins him in an adventure that will take them to the limits of human comprehension. As they race to unravel the secret of the 12 Monkeys, their paths cross with a one-card-short-of-a-full-deck mental patient and a renowned scientist. Before long Cole begins to question his own sanity in a chaotic world that offers many questions but few answers.